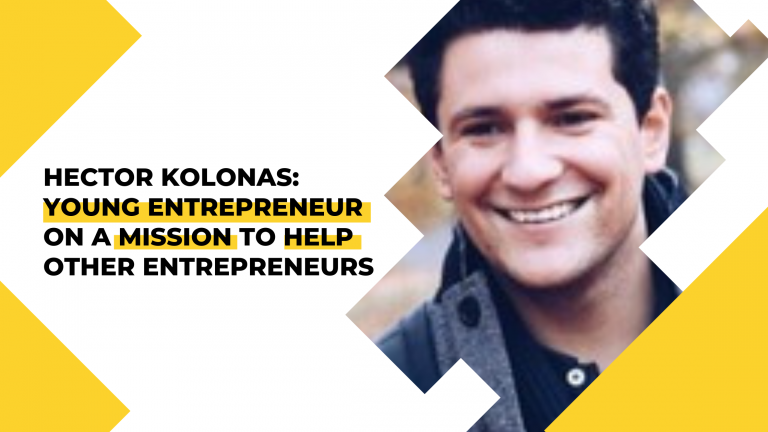 The entrepreneur’s journey is filled with both easy wins and big losses. The feeling of isolation and having to deal with hurdles on their own can take a heavy toll, both in learning a lesson and by paying dearly for that lesson.

For Hector Kolonas, born in Johannesburg, South Africa, his journey to becoming an entrepreneur started at 14 when he began creating websites for friends and family. After relocating to Cyprus with his family around, Hector found himself in a new country with a new way of life. Already a self-taught coder, Hector threw himself deeper into this learning, doing odd jobs and experimenting with tech through his own online magazine. From the age of 18, Hector developed a name for himself, and a business, building white-labelled web campaigns on behalf of advertising agencies.

The 2013 Cyprus Bank Bail-in hit Hector hard, as his business services the advertising industry and billed on credit he was one of the many to be axed, alongside an influx of involuntary freelancers across the island. Between wrapping up dealings with his former clients, the ad agencies, Hector discovered that their offices were standing almost empty. These places had everything that any involuntary freelancer may need – desks, chairs, coffee, internet… Hector managed to arrange a deal with the agencies to rent out desks to freelancers and unexpectedly started a small coworking community.

After reaching out to some small businesses and entrepreneurs the once quiet spaces became a bustling hive of activity. And by the end of that first week, formerly-unemployed independent professionals were working on new projects, and a wave of new businesses had sprung to life. It is here where Hector witnessed the power of collaboration, one of the coworking values.

Hector’s passion lies with entrepreneurial communities and supporting business within their neighbourhood using the power and reach of the internet. Hector then identified three tech challenges the coworking industry faces –

By the time Hector was due to launch his solution, he managed to work with 30 coworking spaces across Europe on marketing themselves – even in regions where coworking was a new or unknown industry, like Greece, Spain and Italy.

Still working in the traditional office setting, many of these individuals were not open to sharing business contacts, suppliers and consultants that they made use of. And yet businesses share similar buying patterns, which left great buying power locked away.

From this included.co was born

included.co leverages this buying power to make things more discoverable at bulk-buying prices. It is a resource of business tools and solutions for entrepreneurs, start-ups, small business and independent professionals to make use of. Access to deals and perks enables them and their businesses to perform better. Simply summed up ‘included.co leverages the reach and aggregated buying-power of a global network, to help bring the best products and services to businesses everywhere.’

Hector’s vision is to support the business community and ultimately make business and entrepreneurship more sustainable. included.co leverages the power of the many and the fairer pricing that comes from being connected with a global organisation. included.co’s purpose is to improve the success of a business in even the smallest increment, making a massive difference to the future of work.

The dream that Hector has for included.co goes much bigger than Europe and America. As Africa starts seeing more reliable and affordable internet connections, included.co has the opportunity to dramatically change the lives of entrepreneurs, start-ups, small business, digital nomads and remote workers in this country. One day no one will feel like they are continents away or be barriered by their geographic location. It is an opportunity to build or rebuild neighbourhoods and hyperlocal economies by providing access and support directly into each country, city and town.

included.co also supports the annual European Freelancers Week (#EFWeek), taking place digitally this year from October 16th to 25th. Encouraging freelancers, coworking spaces and organisations to converge during this time, even if it is arranging micro get-togethers, coffee dates or digital gatherings. The aim is to build communities around those business owners that are feeling isolated, to connect with those that need to grow their horizons and to re-inspire the passion after the difficult year 2020 has been.

This is also the opportunity for coworking spaces to establish new connections, and provide levels of support for the community by identifying the needs of these independent professionals.

You too can join in the #EFWeek movement by learning more here. To learn more about included.co and how you as an entrepreneur, freelancer or community can benefit from the many perks and deals, read more here.