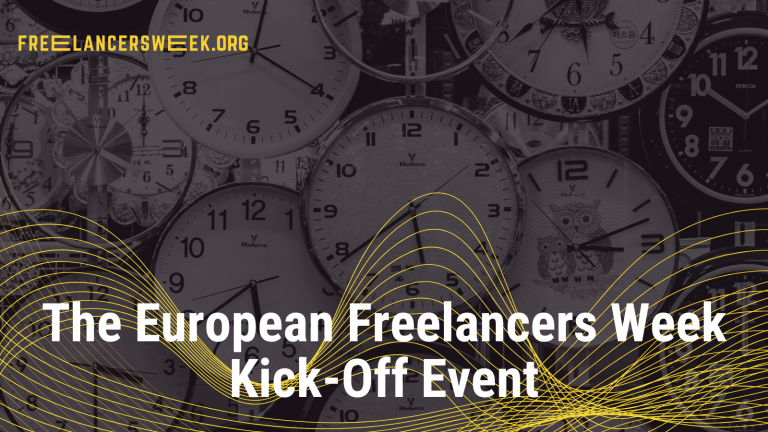 Stand up, speak up, show up – this was at the core of the kick-off event of this year’s  European Freelancers Week (#EFWeek). More than ever before, freelancers need to stand together to grow the economy we want to see.

If you were unable to join our event – we are happy to share some of the key insights with you:

Elina Jutelyte, from the Freelance Business Community, opened the event and spoke about her own experience in the freelance community. She highlighted some important history and background information about the freelance sector and the way freelancers have been seen and how that has developed over time.

“This is the moment when freelancing in Europe (but also globally) is celebrated. This is the time when we stand up for freelancers to find their voices, and we take action towards making freelancing a more visible profession,” Elina said.

She also mentioned that the #EFWeek gives us a chance to discuss the opportunities that freelancers have, especially with the changes that are happening in the world through the recent years, and also the challenges that some of the communities are facing.

Elina pointed out that there are attendees from different countries and that each country has their own legislation and approach to freelancing. “We all have different legislation in our countries, different ways of collaborating, but somehow there are universal things that we should keep in mind. There is little we can do without the support of the governments, and obviously, the legislative framework that is associated with freelancing in some countries, it’s still in question. In some countries, it’s still not even legal to be registered as an independent professional.”

The mic was handed over to Jeannine van der Linden, Director of the European Coworking Assembly. Jeannine spoke about the founders of #EFWeek and the vision that they had for the movement.

“The #EFWeek started in 2016 when there was a gathering of freelance organisations and communities. Three people – Matija Raos, Francesca Pesce, and  Joel Dullroy – got together at a meetup of freelancer organisations and they were talking about the commonalities among freelancers, in each of their respective countries. They came up with this idea, which is essentially a crowdsourced week in which freelancers could register their own events, either event they developed just for #EFWeek, or events that they were already doing. The idea was then to register them all in one place and have them organised under a common theme and a common branding,” Jeannine explained. “Later, Marco Torregrossa joined the EFWeek and developed it into a stronger platform for freelancer voices.”

According to Jeannine, the only way for freelancers to achieve basic civil rights is through collective action. “Freelancers are the only group of people that can right now be freely discriminated against without any consequences. The reason for that is primarily that most of the civil rights legislation that we have in Europe is based on the notion of employment. But in terms of specifically freelancers, there isn’t any anti-discrimination, anti-harassment, or civil rights legislation to support them. Therefore we need to take collective action to drive awareness.”

Jeannine points out that the #EFWeek manifesto is one of the ways in which awareness can be created. And, if all freelancers stand by this manifesto then collective action can drive governments to see the need for freelancers to have basic civil rights.

Robert Vlach, Author of The Freelance Way, and Founder of Freelancing.eu and Navolnenoze.cz pointed out that many surveys are done incorrectly when looking at freelancers, some people are categorised as freelancers even if they themselves don’t categorise themselves as such and in general the definitions are still murky and are not consistent across studies.

Some surveys, such as the one done by Upwork, indicate that 36% of the workforce is made up of freelancers. Robert points out that in contrast the survey that Fiverr did on the independent working force showed a different result of only 3.8% of the workforce being freelancers. Fiverr looked at the tax returns of US citizens to help support their research.

“These numbers are important because it shows that the amount of freelancers in the workforce isn’t as high as we thought it was. This means that the competitiveness is lower than anticipated. Freelancers believe that they are easily replaced, but it isn’t true. Finding a good freelancer is not as easy as it sounds, especially because the majority of freelancers aren’t even online,” said Robert.

They went on to discuss the importance of events like these and how they can help the European freelance community. It can help freelancers to know their worth, both in terms of money and in terms of basic rights. For a community to stand together, they need to have the same vision.

You can still be part of this movement, by hosting your own event where you get to share your ideas and tips. Or, you can simply attend events listed on our website. Don’t forget to subscribe to our newsletter to stay in the loop.