The Importance of European Freelancers Week for the Freelance Community 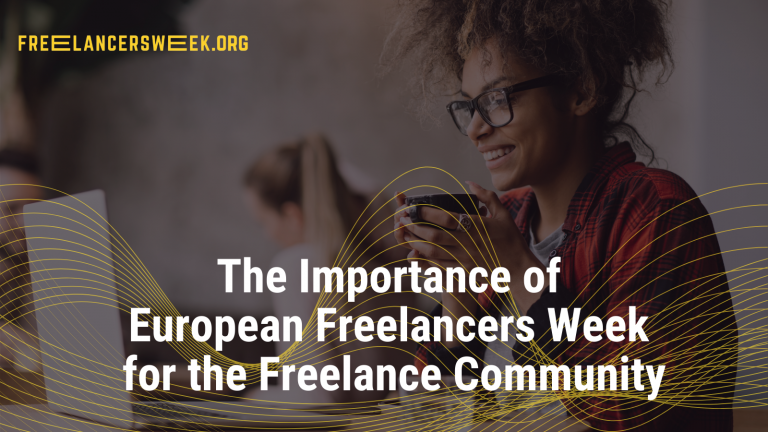 Since 2016 there has been a rise in the European freelance community, with an astonishing 9.6 million Europeans working as independent workers. With the implementation of remote working since the start of the pandemic, the boom has become even greater. The amount of freelancers and independent workers increased due to some being dismissed from their permanent jobs and looking for a source of income, and others realising the benefits of being one’s own boss. In 2020 the number of freelancers in Europe was more than 22 million according to a report done by Malt.

While the future of work is still changing and workers now somewhat adapted to the ‘new normal’, it is important to note that the large community of independent workers in Europe is still ever growing. Therefore, having a platform where freelancers can express themselves will not only encourage them, but help them become confident and see the value that they bring to the European economy.

European Freelancers Week (EFWeek) is the perfect opportunity for freelancers and independent workers to find their voice and stand up for what they believe in. As most freelancers can testify, their work is not always valued due to their profession or the title ‘freelancers’. However, independent workers contribute tremendously to the European economy, and should therefore be treated just the same as any permanently employed worker.

EFWeek can help freelancers find their voices and host events to stand up for what they believe in. By registering your event with EFWeek and inviting your community to attend your event – we can help you to stand up, show up and speak up. These events are focussed on bringing together the Freelance Community so that similar experiences can be shared and discussed through the EFWeek platform in the form of events.

This year’s EFWeek has been seen as the largest annual celebration of the independent workforce, showing millions of Europeans the benefits of the Freelance economy and allowing them to discover it through a community. This will be the sixth year that the event will be hosted. This year’s event will kick off on the 18th of October and continue until the 24th of October.

The event is made up of a series of independent events, under a united theme and branding, in a range of European countries. Following the challenges of 2020, the event will once again be hosted online – providing even greater opportunities for freelancers to attend and sponsor to participate in a creative manner.

What makes EFWeek even more supportive of the freelance community is that the promotion of the registered events will be handled by EFWeek. This allows the hosts of their events to only focus on preparing for their event, ensuring that they can host said event to the best of their abilities.

This year the focus will be on generating recognition of the value that freelancers bring to the European economy, as well as highlighting the challenges that freelancers face and showcasing the solutions that can ease these challenges. Another major objective of this year’s event is to focus on improving the conditions of freelancers and independent workers, this will be done through learning, sharing and networking, as well as policy action. The main focus will be on freelancers showing up, standing up and speaking up for what they believe in.

EFweek is created for freelancers to use their voices to promote what they stand for. Freelancers are not always treated similarly to permanently employed workers. They do not have any benefits such as health insurance, retirement annuities, approval for bonds and loans, or even employers who handle their taxes for them.

According to the same Malt study the main challenges among freelancers were negotiating with clients (which was one of the highest ranked challenges), access to housing, getting paid quickly, access to health insurance, administrative tasks, rules and regulations, working alone, and maintaining a good relationship with clients.

When all of these challenges are taken into account, being a freelancer is no easy job. That is why EFWeek has been created, to give freelancers and independent workers the opportunity to come together and stand together. It created a community where everyone knows the struggles. The community is there for support, but also so that freelancers can share their ideas and solutions.

This allows freelancers to showcase their talents and also how they have worked around the challenges. It gives the community the ability to stand together and to share their advice through online events that they can register ahead of time.

Be sure to keep an eye on the events by signing up for our newsletter that informs you of the who, what and where before the week kicks off. For any further information on hosting an event or attending one, feel free to contact us or give us a follow on our Facebook, LinkedIn, Instagram and Twitter accounts. Hope to see you there!