The 5th #EFWeek celebration kicks off in October 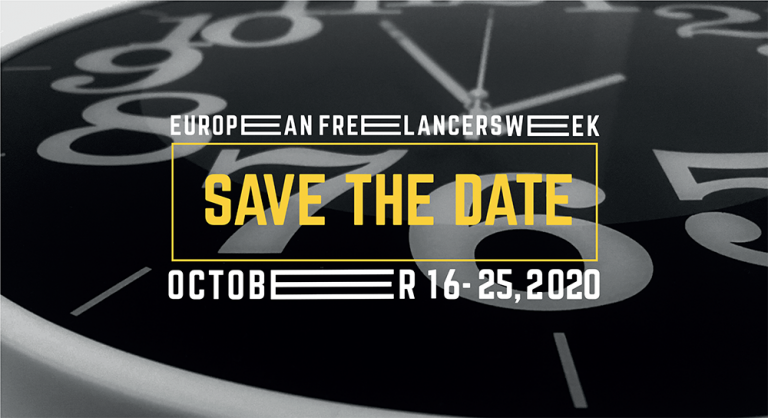 Amsterdam, 1 September 2020 – The fifth #EFWeek, organized by the European Coworking Assembly, is unified by the theme “‘Freelance Ecosystems in Europe’ and is specifically created to offer independent professionals and coworking spaces across the globe the means to join together to improve their independent careers through learning, skill-sharing, networking, and political action.

Kicking off on October 16th this year, the digital-focused event will see freelancers and coworking spaces in European countries dedicate six days in celebration of the independent workforce, showcasing the benefits of the Freelance Economy.

Following the devastating impact that Covid-19 has on freelancers and independent coworking spaces which are traditionally known for a culture of collaboration and community, the banding together of freelancers and coworking spaces has never been more important. The aftermath of this pandemic brings a rebirth of lifestyle and working practices and puts us in control of developing the blueprint for the ‘new normal’.

“Freelancers are on the front lines of innovation as we come to terms with the way we will be working in the future, they are the most familiar with the ways in which the change can be a good thing for us all; and yet they are also the most vulnerable and least supported”, says Jeannine van der Linden of the European Coworking Assembly, organizer of this year’s #EFWeek.

There are 12, 7 million highly skilled own-account workers in Europe, nearly 8% of the total adult working population, as well as close to 6,850 flexible workspaces in Europe, with London being one of the world’s leading cities in terms of the number of new coworking space opening up.

Whether you’re just starting out as a freelancer or have been working as one for years, some of the biggest problems you face are being tackled right now today among the community of #EFWeek sponsors and supporters. While many talk about the future of work, the changing face of the global economy, and negotiating the problems and triumphs of the nature of work, the coalition that creates #EFWeek sees to it that those changes are being made and shown to the world every day.

The participating coworking spaces form an infrastructure for the future of work, supporting the freelancers and businesses they work with in creating a future we want to return to. By speaking for one week with a unified voice, issues such as payment salary protections, pension protections, protection in case of illness and disability and civil rights protections are highlighted as is the importance of campaigning for providing a safety net to the millions who work independently.

This year #EFWeek kicks off digitally on October 16th  –25th , 2020, in an unconference format to include multiple sessions per day on different topics that attendees can jump between freely, visual branding and exposure of sponsors to this target market are maximized, as well as providing clear measurements on engagement, return on investment (ROI) and responses.

Anyone can arrange an event under a united theme and branding which can be hosted digitally, reaching and uniting freelancers and communities around the world. Applications to submit your own event are now open on the #EFWeek website. A downloadable communication toolkit with simple how-to instructions as well as the official logos, graphic templates, photos and press releases for distribution are available. There is also the opportunity to become a sponsor either in cash or kind.

Kickstart your marketing and awareness activities soonest and include the hashtag #EFWeek in your digital communications so that we can support you. The six-day long series of events embrace the five values that coworking is built on; accessibility, community, collaboration, openness and sustainability and is made possible by a great network of partners.

Notes to the Editor

The European Coworking Assembly is committed to this network of peers, which is improving Europe in an open, collaborative and horizontal way.

The Assembly has a European identity in the broadest sense of the word based on the five values of coworking:

In 2019 the European Coworking Assembly stepped in as the coordinators of EFWeek.

European Freelancers Week is brought to you by European Coworking Association